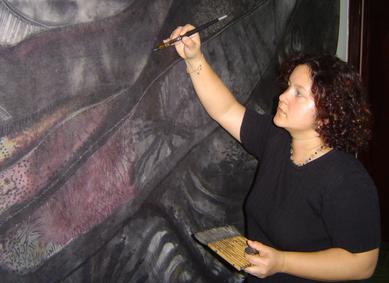 Liang Dominguez Fong was born in Havana, Cuba on January 24, 1975.  She is a painter, engraver, serigraphist and sculptor.  Liang graduated from the San Alejandro School of Arts and also has a Masters Degree in advanced arts from the Cuban University of Arts (ISA).

Liang's work has been exhibited internationally in Miami Wynwood Galeria  and in San Francisco (Mission Cultural Center for Latino Arts) in the United States, along with exhibitions in Malaysia, Spain and France.

She took part in the exhibit "Arte Cubano, Between the Canvas and the Paper," at Sala Miro in Paris, France.

Since 2000, she has been the director of the Contemporary Graphics Studio in Havana. She was awarded the Prize of Plastic Arts.