Jorge Manuel Almagro Calderon was born in Havana on January 20, 1960. He is a painter and stage designer. He graduated with a specialty in set design in 1981 from the National Institute of Design. In 1986, he earned a degree in painting and drawing from the Academy of San Alejandro, Havana, Cuba.
He studied for two years at the National School of Film, Radio and Television, specializing in film cinematography and has worked as a teacher and instructor of art at various educational institutions in Havana.  He was also a scenic designer at the Cuban Institute of Radio and Television and the Cuban Institute of Cinematographic Art and Industry (ICAIC). He served as Artistic Director of the French firm Bay Vista for several years.
His work has been in international exhibitions in Italy, Mexico City, Dominican Republic, Spain and Angola from 1993 to 2004. 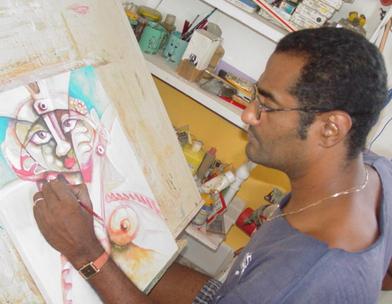