MANUEL MENDIVE HOYO graduated from the San Alejandro School of Fine Arts in 1963. He was later granted a masters on Ethnology and Folklore by the Cuban Academy of Sciences. His work focuses on the Yoruba religion and traditions brought by slaves from Africa into Cuba during the Spanish colonization. He excelled in wood carving, collage, sculpture, assemble art, tapestries, stain glass and he was a pioneer in body painting. His work is centered around his own personal perception of our Cosmos and spirituality. His art interconnects humankind and nature with esoteric and symbolic content and delivers a deep load of spirituality.
His work has been exhibited in the United States, France, Spain, Mexico, Italy, Greece, Tanzania, Colombia, Chile, Jamaica and many other countries all over the globe. 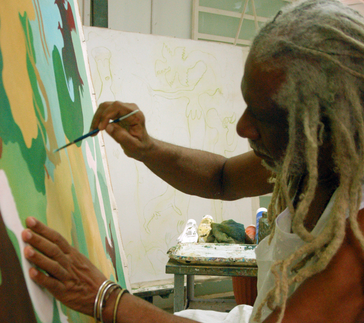